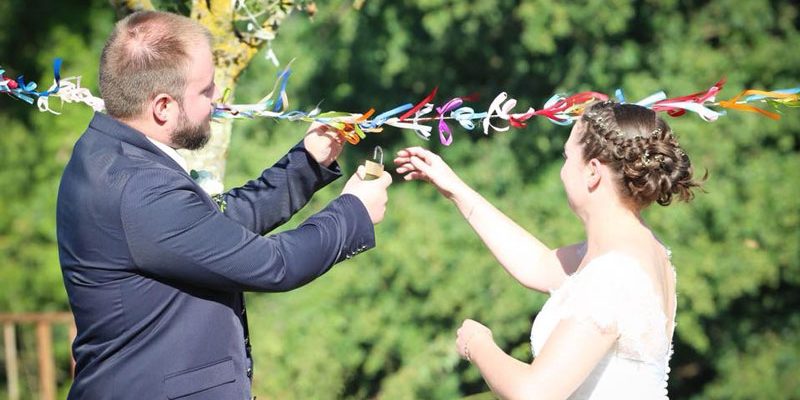 Can you come to Toulouse? Because we didn’t find anyone in our region and we like you. This is the question Margaux and Julien asked me. Of course I can! How could I say no to love? I can’t! We met on the quays of Bordeaux, facing the superb Chaban Delmas Bridge, at a very nice café.

They were so cute!! They told me about their story and I didn’t dare to stop them to say: “Keep some details for later”, because I really liked them! After ten years together, their eyes were still sparkling and their simple gestures – like sharing a cup of mint tea – showed a sort of fusion you don’t see everywhere. Their love cannot be described or explained, it can just be admired, silently. After each meeting with them, I felt light, on cloud nine, over the moon, they made me dream despite all the stress Margaux felt for the preparations. She would have liked to know the text I was writing for the ceremony but, no, I did not give in, I kept the surprise, so yes, it stressed her out a little.

On September 1st, I began the month with a strong word: LOVE. I know that’s what I’m going to find as the ride starts that morning, two hours away from home. And when I arrive on site, I’m flabbergasted; a pastel decoration, little hands arranging flowers, dream catchers… The wind makes all these elements float without sweeping away this atmosphere of well-being and good mood.

Eventually, the bride is not stressed and the groom is still so calm, so everything is perfect. Margaux wanted a well-built ceremony, with a logical common thread, interventions (six in all, so a bit of cunning is necessary for everyone to get the chance to speak), she had a clear picture of what she wanted for her wedding. I was a little under pressure, I must confess.

Speeches came one after the other, some with laughter, others with tears for the most sensitive (I, for instance, had to hide so that no one could see me cry a little), but always with smiles on the couple’s faces. I even succeeded in finding a moment between all those speeches to whisper a few words for the bride and the groom.

Margaux and Julien are both surrounded with love while keeping a very attentive eye to their families. That’s why they chose a group ritual, filled with colors and sharing moments. They used ribbons, but in a different way compared to the weddings I wrote about in my previous articles. They tied a thread between two trees. Each guest had to knot a ribbon, the color they wanted, to that thread. I had previously explained the meaning of each color to the guests, so that they could choose before tying theirs. Something so beautiful happened spontaneously then: each guest stopped to kiss and hug the couple after having tied their ribbons. That was a very special and symbolic moment, full of simplicity and Love, with a huge L.

When all the ribbons were tied to the thread, Margaux and Julien hung a padlock, into which their first names were carved, in order to seal their love with their relatives on that thread. Finally, they threw the key away, so that no one would ever find it. So, so beautiful!

The end of the ceremony

I was expecting very long vows, full of stories, but I was wrong. Margaux read a poem, and Julien a few funny lines. But those words were full of love, promises to come, certitude and emotions.

They couldn’t stop smiling for the hour we spent together, laughs and tears confirming their desire of a radiant, emotional and familial ceremony. My mission was accomplished and I was delighted.

Here’s the bride’s testimony: “Thank you Mélissa for your help in the organisation of this ceremony! That was exactly the one we wanted. I recommend Mélissa to those who want a ceremony which looks like them.”