The ritual of sand and rose 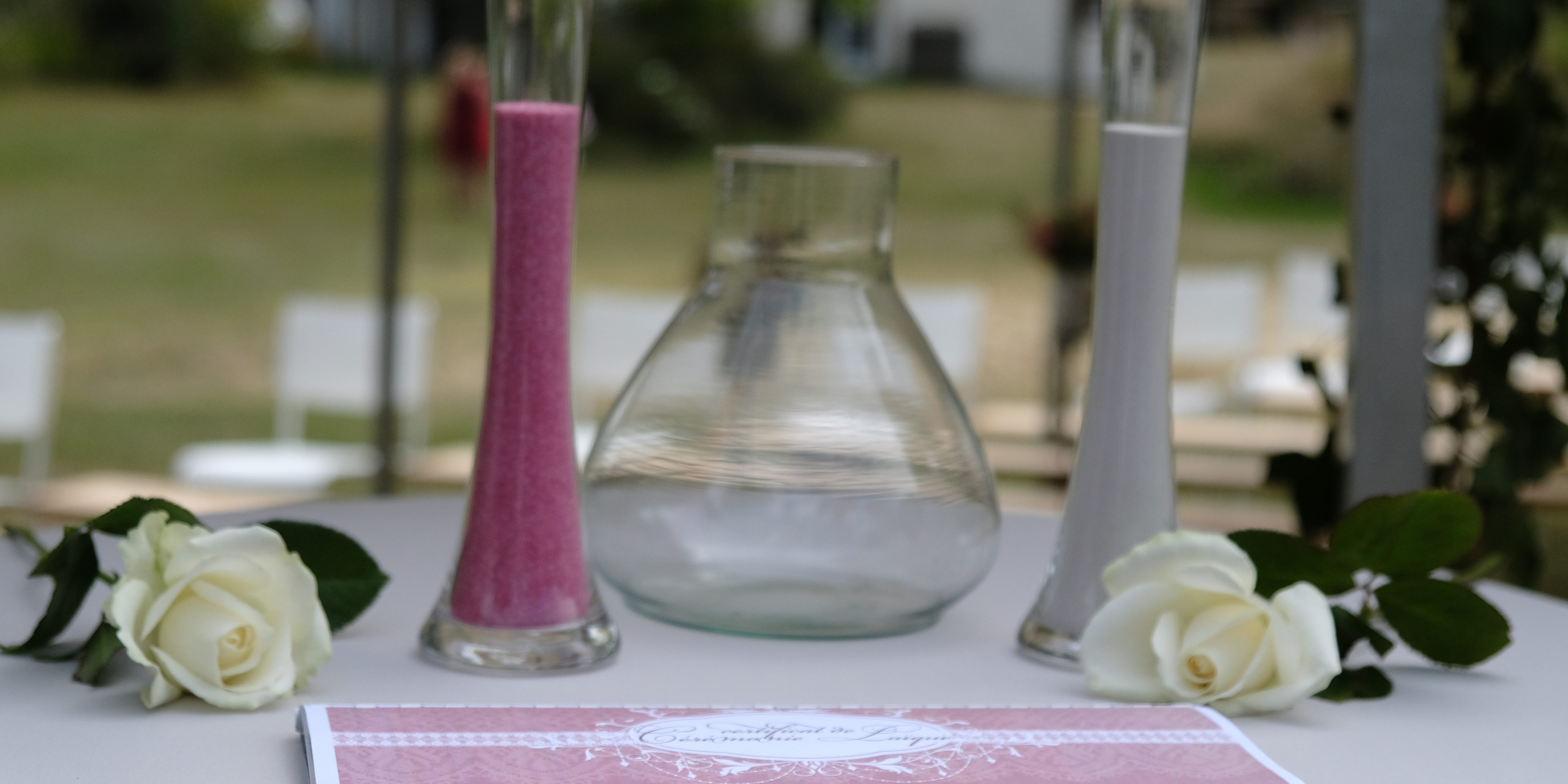 One year ago, I had a phone call from Maeva who wanted to get married. Her stress was palpable. She was still hesitant over a few things, but she was sure of one: she wanted a non-religious ceremony. So, we talked and planned an appointment so that I could meet the engaged couple at their cosy home, with their little boy having a nap, and the other sleeping in her mother’s warm belly. The two lovers were ready to ask all their questions about the ceremony ! And this is how our adventure began!

Maeva and Alexandre fell in love at school, when they were 8; you can’t resist then! Life tried to separate them, but Cupid didn’t agree with it, and so much the better, I hear you say, for we wouldn’t have lived that beautiful ceremony full of emotions otherwise. Well, let’s make things straight: Mister Groom isn’t a very demonstrative nor romantic person, so I wondered about his reactions on the Dday. And in the end, I was overwhelmed with emotion! I must say, they are very close to their family, and their friends are devoted. Also, the service providers did a great job, so the ceremony went really well. As the groom appeared, the air was filled with emotions, but when the bride entered the scene; Wahoo! The song pierced our hearts, the groom was on the verge of crying, the bride was in tears and so was half of the audience. Those were tears of joy, emotion, beauty and love. In my corner, I was trying not to break, because I had to do a great job! The ceremony moved on with still lots of tears and emotions, speech after speech. I could feel how the couple was happy to live this moment, looking and smiling at each other.

Maeva and Alexandre chose the sand ritual, which is very famous but always very intense and symbolic. This was made for them; love with simplicity. But they added something more; they exchanged their vows and gave a rose to each other which represented their mutual passion and love. As for the rings, we chose the Chinese wedding rings ritual. I don’t know if you know it, but this is a very beautiful and spiritual moment. For Chinese people, each finger represents a part of our close family: the thumb symbolizes our parents, the forefinger represents our brothers and sisters, the middle finger is for ourselves, the ring finger symbolizes our lover, and the little finger represents our children.

The bride and the groom are supposed to put their hands palm against palm, before folding their middle fingers inwards, in the heart of their hands.

Then, they tried to separate their thumbs: they succeed because their parents are not supposed to stay with them forever. They put their thumbs together again, and tried to separate their forefingers: they also succeed because their brothers and sisters are meant to raise their own families. They put their forefingers together and try the same thing with the little fingers. Once again, it’s a success, for their children are supposed to have their own family as well. Finally, once their little fingers were back together, they tried to separate their ring fingers: they can’t, because they commit to remain “tied” to each other “For better or for worse”. Those three rituals were very symbolic and looked a lot like them: demure but full of love.

The end of the ceremony

All in all, as early as our first meeting, and after all those conversations on the phone, by email, and during our appointments, I told myself those two were definitely not making my job easier, with all those unconfessed feelings. But here was my challenge: I had to see right through them and make them feel this “bang” during the ceremony. And it happened, I saw it, I saw their eyes sparkle, I felt their warmness when they thanked me at the end. Anyway, I did it! Their happiness and their smiles were my greatest pride that day.

I’ll be back soon with new articles about ceremonies and weddings. In the meantime, feel free to contact me if you want to live that “Bang” too!

The bride’s testimony: “Thank you, it was wonderful. Everybody liked the ceremony. There were indeed a lot of emotions, I wanted some, I got them! Really up to our expectations.”